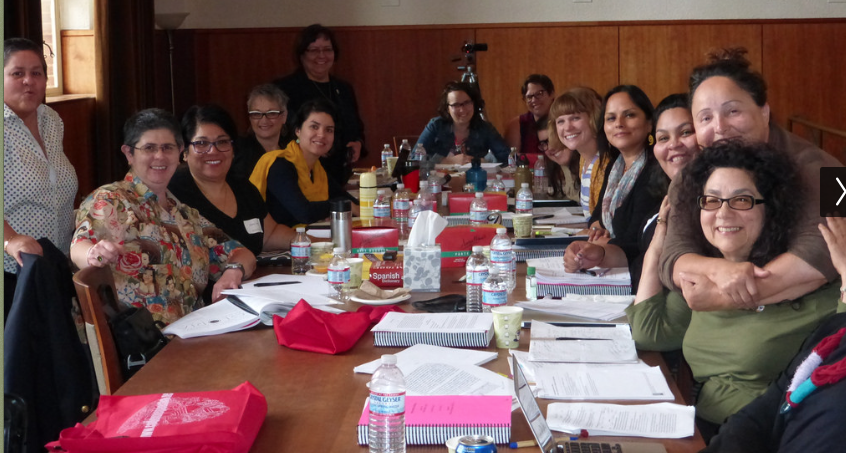 On April 25-26, 2014, the Pocha Poetics seminar group was finally able to come together to launch the work of Codex Nepantla. This seminar was funded by the UCHRI Seminar Grant, and allowed for faculty and students of multiple campuses of the University of California to come together to discuss the politics, poetics,and ethics of translating Chicana feminist/lesbian theory into Spanish. We also shared our own personal battles with linguistic terrorism as different members recounted their experiences with the term "Pocha" as a personal/familial/social stigma that in large part has prevented us from bridging the linguistic border in our academic work.

The Pocha Poetics seminar took place at UCLA, with the support of the LGBT studies program (shout-out to Tomarion Brown for taking such good care of us) and the Chicana/o Studies department. The group included Professors Tiffany Lopez and Alicia Arrizon from UC Riverside, Professors Chela Sandoval and Ellie Hernandez from U C Santa Barbara (Aida Hurtado and Emma Perez were also going to join us but got sick and couldn't come), Professor Deena Gonzalez from Loyola Marymount University, and my darling Alma and myself from UCLA. We  were also joined by graduate and ABD students, Sandra Ruiz, Kendy Rivera, and Jacqui Caraves from UCLA, Tracy Zuñiga from UCR, and Cristina Serna from UCSB. Our special guest via Skype was Mariana Perez Ocaña, editor and co-founder of LesVoz (the longest-running--20 years!--lesbian feminist organization and publication in Latin America). The seminar was closed to the public, but we did extend an invitation to the other Chicana/o Studies Ph.D. students at UCLA, and Angelica Becerra and Rose Simmons participated on the first day. Another guest was Paola Zaccaria, an Italian translator of Chicana/o scholarship, who happened to be conducting research at UCSB this quarter. My undergraduate research assistant, Dafne Luna, and her partner Mireya Jordan rounded out the seminar.

We opened the seminar by showing clips of the Marcha Lésbica in Mexico City that Alma and I  attended in March 2013 organized by a committee of lesbian feminist organizations in D.F., which included LesVoz. We wanted the Pocha Poetics seminar group to see the masses of young women that had attended the march from all over the country, both as a way of showing the huge popularity of this event in Mexico, and to show the group who the audience is for our translations. We know and support that, under the leadership of Marisa Belausteguigoitia, the Programa Universitario de Estudios de Género (PUEG) has been working on translations of two foundational Chicana feminist texts --Borderlands and Methodology of the Oppressed-- for several years, but we are interested in reaching a more grassroots audience through Codex Nepantla's translations.

Employing a Freirian dialogic approach, the group spent almost the entire first day immersed in discussing the many readings I had compiled into a course reader: essays about translation as both a colonial and a post-colonial praxis, the ethics of translation, and translation in the service of resistance to hegemonic erasure and appropriation. We also spent some time discussing Malinche's curse and the issue of being seen as traitors by Mexicanas/os for "forgetting" or "polluting" our Spanish. We also discussed the essays of our Mexico City colleagues who have developed an intriguing methodology for integrating Chicana feminist theory as a pedagogical tool in their university classrooms.

Mariana Perez's virtual presentation via Skype explained her view of the lesbian feminist crisis in Mexico. The radical lesbian feminists who by and large constituted the face of LGBT struggles in Mexico over the last twenty years feel, on the one hand, that they have been co-opted and erased by the more mainstream and upper-class "Cuir" or Queer Theory in the academy; on the other hand, they also feel occupied and marginalized by the new Sexual Diversities orientation of the current LGBT movement  in Mexico. Chicana feminists and particularly lesbian feminists have not only "been there, done that," and continue to undergo similar struggles against erasure north and south of the border, but also, we have theorized our experiences with racism, sexism, homophobia, gender identity, etc. for the last 40 years and developed a body of literature that has yet to be translated into Spanish. Mexican scholars, students, and activists have access to the gender and sexuality discourse of Euro- and Anglo-American feminist scholars such as Judith Butler and Lillian Faderman, whose work is rendered in Spanish translation, but know little to nothing about Chicana Feminist/Lesbian Theory. Thus, the project of Codex Nepantla, which has now started with the work of the Pocha Poetics Seminar, is to translate our own work using the method of what I call "translation in the flesh," and make it accessible to a Spanish-speaking LGBT grassroots readership in Mexico.

While discussing the ethics and politics of translation, the "invisibility of the translator" (Lawrence Venuti) and why Chicanas can't be invisible translators, the impact of "the regime of fluency," which Anzaldúa called "linguistic terrorism," the identification between pochas and malinches, and the use of translation as a colonizing practice as well as a post-colonial praxis, participants spoke to why some of them (and so many other Chicanas/os of all generations) either don't speak Spanish or fear they speak "bad Spanish." What kinds of translations could we do of our own work if so many of us have such a limited fluency in reading or writing Spanish?

On Day 2, seminar participants engaged in two workshops to help respond to the question above. In the translation workshop, we experimented with literal translation and what I called transinterpretation of select concepts from our course reader. The exercise showed us the difference between translating a sentence code for code, and translating/interpreting the same sentence in such as way as to retain the meaning and the poetry of the original, using our own syntax and vocabulary.  Hence, we were engaging in "pocha poetics." (I will be posting an example of the exercise in another entry.)

The workshop proceeded into a semiotic discussion of TRANSINTERPRETATION, by looking at the etymologies of TRANSLATE and INTERPRET, but also by looking at other ways in which we deduce meaning, such as INTERPOLATION and INTERPELLATION. Although we had decided that perhaps the term TRANSINTERPOLACTION would more effectively capture the multiplicity of actions and meanings we hoped to convey with our translations, I made the executive decision to return to the simpler, TRANSINTERPRETATION, to keep our work and our language from straying too far into the poststructuralist abstractophere. Seminar participants can argue with me on this point if they wish. 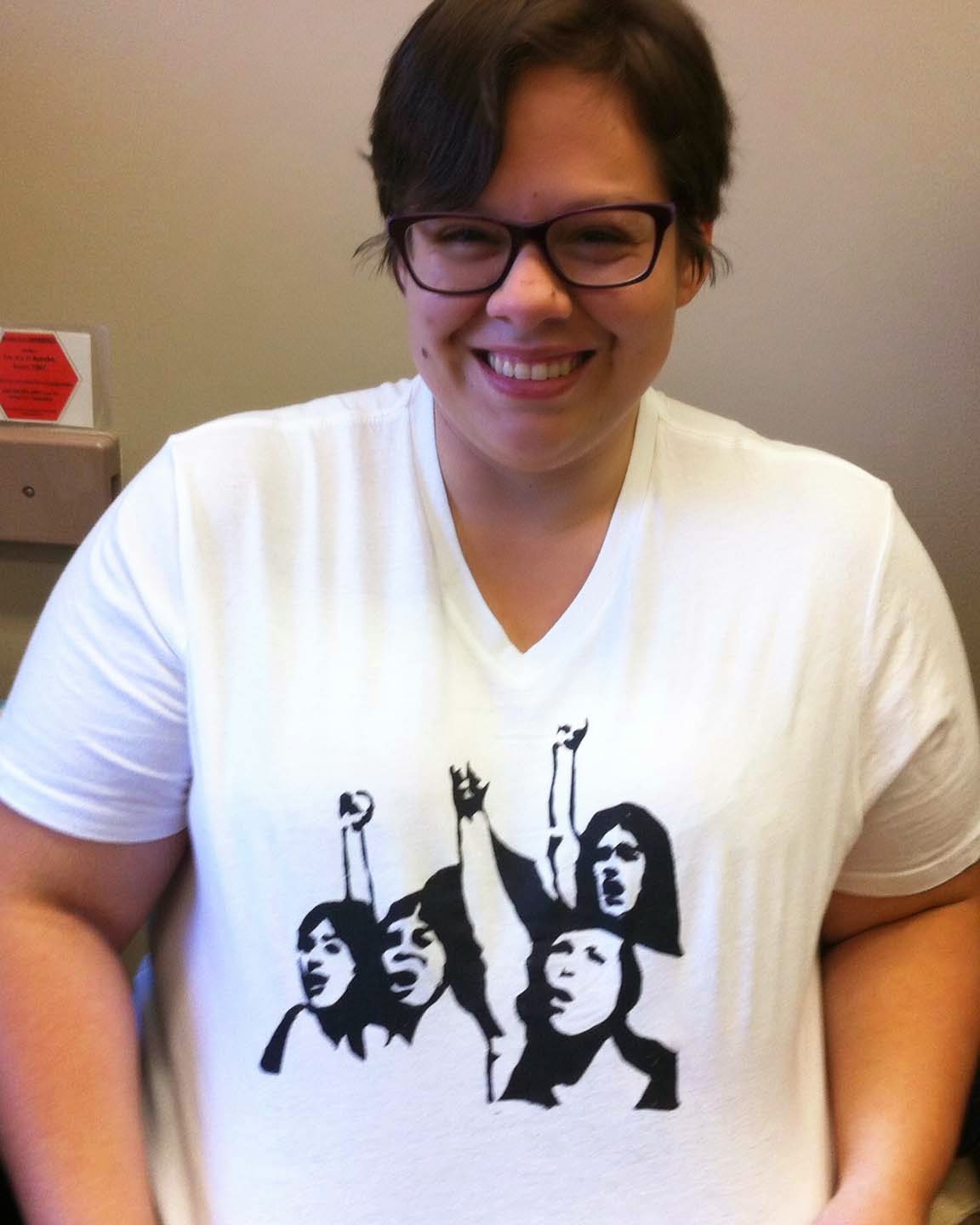 The second workshop, led by Alma Lopez, was a stenciling workshop in which we visualized symbolic interpretations for some of our theories, symbols that we then learned how to trace and cut out and stencil with acrylic paint onto our T-shirts or notebook covers. Luckily, Alma had already sent us examples of possible symbols that we could play with (a very good thing, since time was running out). Those of us who stayed for Day 2, walked out of there with T-shirts and hoodies printed with the word POCHA, fists of feminist power, roses and combinations thereof. Most importantly, we conceptualized the workshop's logo (see below).

The etymology of Translate, or carry across to the other side, suggested the notion of border-crossing and we saw ourselves as theoretical coyotas sneaking pocha poetics and theory into Mexico. From this discussion, Alma constructed a logo for the work we are proposing to do, that includes the image of a howling coyota straddling the U.S.-Mexico border with the full moon of Coyolxauhqui (the dismembered daughter whom we use as a primary symbol for the ways in which the lesbian and feminist daughters of our culture are dismembered and disarticulated by patriarchy) rising in the north. By connecting the name of Coylxauqui to the theoretical coyota and what Chela Sandoval calls "movidas toward decolonized being," we came up with the neologism, COYOLTEADAS, as the name of our strategic "movida" by which to disperse Chicana feminist/lesbian theory, rendered in words and images, throughout Mexico using postcards. 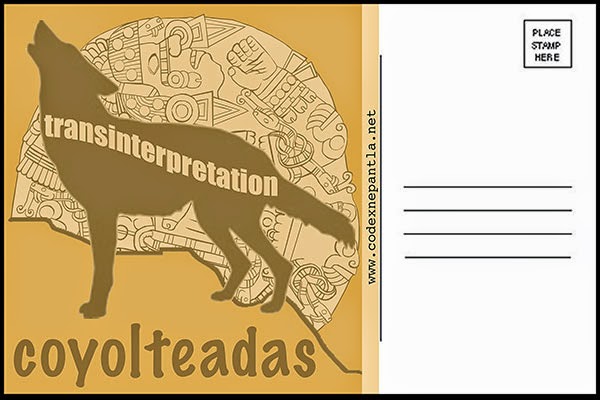 With these postcards or postales, we propose to TRANSINTERPRET -- TRANSLATE (or, carry our teorías across to the other side) and INTERPRET (the meaning, as in theoretical coyotas) -- our foundational theories of resistance, revolution, and survival for a grassroots LGBT audience in Mexico.  Theories to be coyolteadas include Gloria Anzaldua’s mestiza consciousness, the Shadow-Beast, the Coatlicue State, and Coyolxauqui imperative; Emma Pérez's sitio y lengua and decolonial imaginary; Chela Sandoval's third space feminism, mestizaje as method, and methodology of the oppressed. Postcards will cross-reference each other and build on ideas presented in other postcards. We see these Coyolteadas as a public art project that will intervene in metros and buses, on park benches and bulletin boards, in cafés and post offices, community centers and classrooms throughout Mexico City and beyond.

Note for Pocha Poetics Seminar participants: Thank you all again for participating in this historic gathering and engaging so meticulously with the readings and ideas of the seminar. I hope to write another grant that will allow us to meet in Mexico City at the University of California's Casa California next summer to continue our translation in the flesh workshop. Until then, I hope some of you feel inspired to produce your own coyolteadas, and perform your own translation or transinterpretation of a Chicana feminist/lesbian theory here on this blog. Hopefully we can keep the energy and enthusiasm of the seminar alive in this virtual workshop.

Stay tuned to photos of the Pocha Poetics Seminar.

P.S. If you haven't added yourself as an author to the Codex Nepantla Blog, be on the lookout for an invitation that Alma is going to send you with instructions.
Posted by Profe Gaspar at 2:51 PM 1 comment: 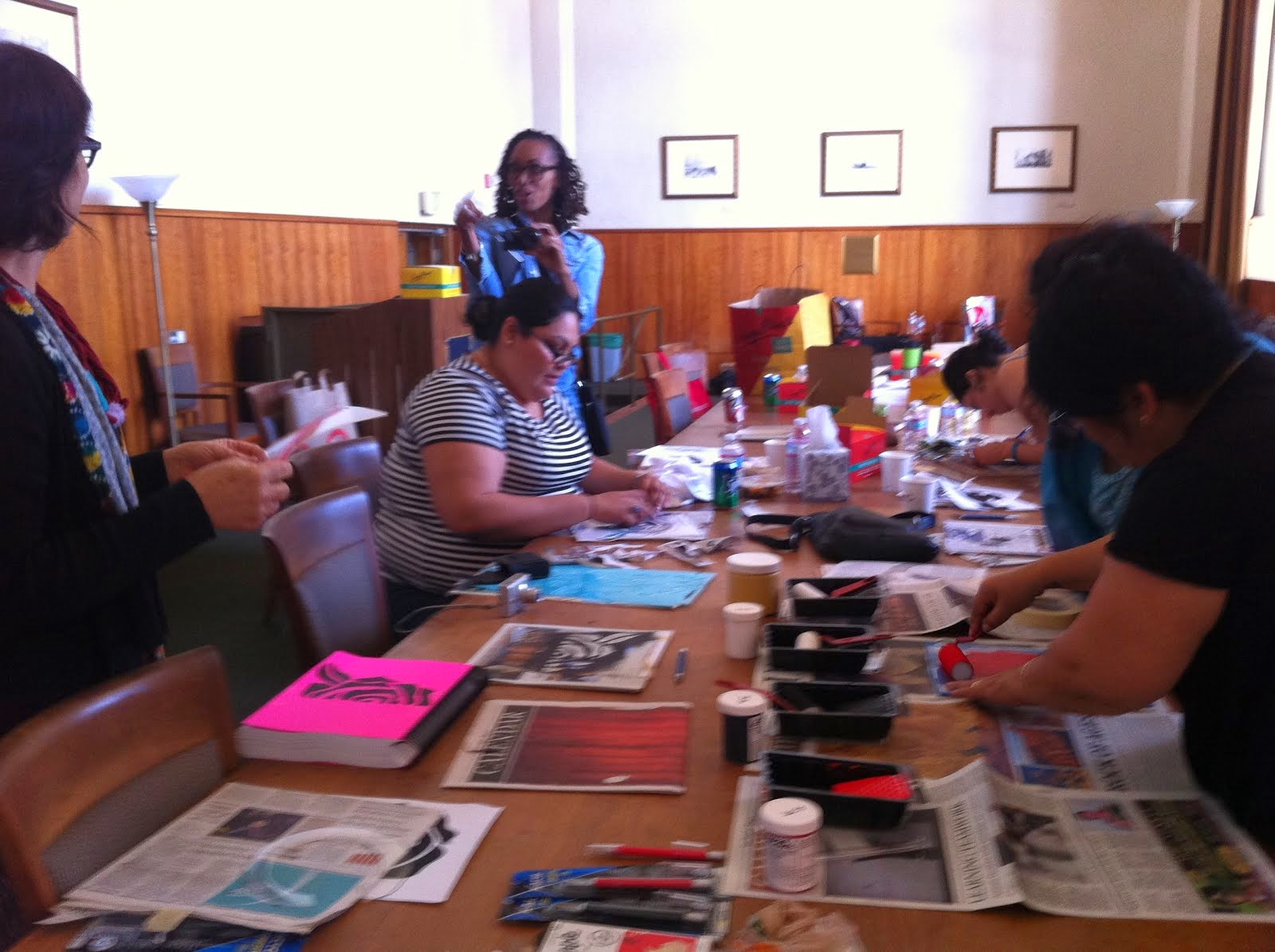 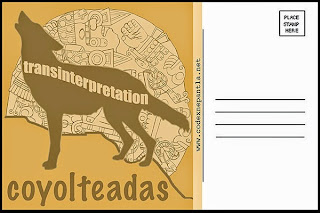 We are a new writers & artists collective located in the third space called Nepantla, whose mission is to translate Chicana feminist and Chicana lesbian theory into Spanish and visual art and transmit it to our compañeras across the border. Our desire is to help facilitate access to this critical, oppositional, counter-hegemonic consciousness of solidarity and love for Spanish-speaking lesbofeminist activists.